The final tune up going into Worlds was almost 5 weeks ago unbelievably at XTERRA USA Champs in Ogden, UT.  With the two previous performances I was confident going in as I was progressing upward instead of having the opposite feeling last year going into the final month of the season.
The course is a lesson in energy management as there is 3000+ feet in elevation gain on the bike and less than 1500 feet of descent on the bike, very similar to Mountain Champs in Beaver Creek, and the run starts on a steep climb straight out of transition.  This course favored the climbing specialists and with all but Dan Hugo the rest of the top US series guys were there then add in Nico Lebrun, Sam Gardner, Chris Legh and Ben Allen and this was easily the deepest field to date.
Last year Ben was not a threat as he was a great swimmer and runner but he could not ride well enough to be a factor, however that all changed last winter as everyone learned at the Asia Triple Crown XTERRA’s races this year.  The first goal was to swim much faster than last year and limit the gap he would get on the swim.  In a tactical move on my part I started way left of where the main group of pro’s were lined up, it was great because I had clear water immediately and didn’t have to fight for space.  I connected with the usual suspects at the first buoy and Ben was just a touch off the front.  We held him in check to about a 15-20 second gap through the whole swim and I had to push him out of the way in transition before grabbing my bike. 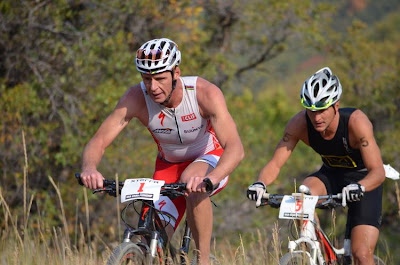 I left in pursuit and used the first couple of flat miles to get the legs in a good rhythm rather than try to blast out and catch Ben early.  Unlike Beaver Creek my legs were turning over and I felt smooth and fast as I headed up Wheeler Canyon.  At a few spots I could see Ben and he had gained a bit of time but was still right there.  About three quarters of the way up, Conrad came by and I was able to jump on his wheel and pace off of him.  I felt great sitting there, pushing just a bit more but was not in trouble of overdoing it.  Continuing up the trail after about a mile Josiah seemed to just magically appear in front of me he was going so fast and if Conrad had been another foot to his left he would have gone straight past us. 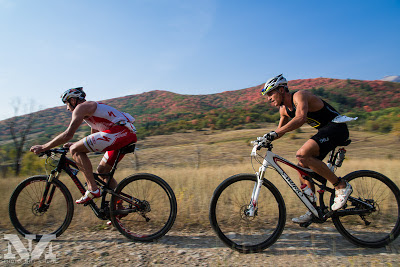 I sat behind them for a few more minutes, Josiah then made the move to the front right when I bobbled and hit my handlebar on a tree and it was just enough that I lost their wheels and was left behind.  Keeping the pace up and tried to keep them in sight but Josiah was a freight train on the move and it wasn’t long before they were out of sight.  I topped out at Green Pond and was a little over a minute down.  On the descent down Middle Fork I had to stop to pick up my EFS Liquid Shot but was riding strong and still was just a bit over a minute down at the second road crossing.  On the climb to Sardine Peak, I rode with Nico a bit before he glided away trying pace off of him as well.  As I neared the top of Sardine Peak my main competitor, David Henestrosa was slowly closing the gap to me and my only thought was hit the downhill first and build an advantage into transition and then to hold on for the run.  I manage to come into transition 90 seconds down from Nico and never heard David’s name behind called when I left transition so I thought there might be a chance. 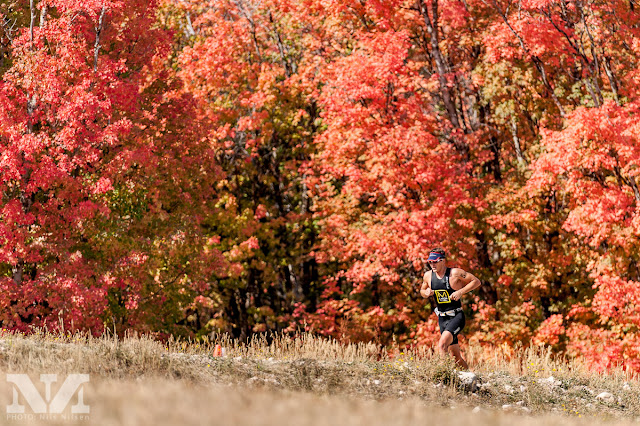 The first mile of the run is straight uphill, and is focused on keeping a quick cadence till I got to the flat and rolling trails in the woods to get the legs really rolling.  I felt great and was strong through the first half of the run a bit surprised to not hear anyone coming up on me but relishing in it as well that I was really going well.  I held strong and consistent and finished in fifth. 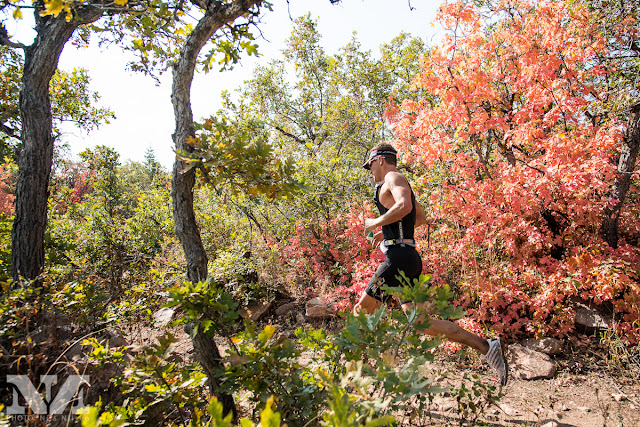 It equaled my best performance at Nationals and I held fifth place in the US Series, only 4 points off of David and Craig Evans who tied for third.  It was a very tight close year and it feels great to be coming on strong at the end.  Bring on Worlds.
Posted by Unknown at 19:58 No comments:

In a what seems to be a blink of an eye the last two months have gone by in a bit of a flash.  World Champs are 5 days away and I have done two races since Mexico, I want to get caught up. 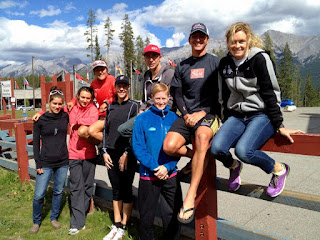 The first race was XTERRA Canada Champs over Labor Day weekend in Canmore, Alberta.  It is the entrance to the South Eastern Canadian Rockies, a favorite place of mine.  Last time I was in the region was 2001 after the ITU World Champs in Edmonton when I toured the Banff and Jasper Parks with my family and I was very happy to be back.  The race was held at the Nordic center which hosted the 1988 Winter Olympics and the trail system is spectacular.  Some good climbs but also great flowing single track and some fun technical trails that favor the savvy, but when it gets wet as it did with the overnight rain and snow really favors the local riders.

It was a chilly 3 lap swim in a small gravel pond, a little unexpectedly I lead through the entire swim and on to the bike.  At the end of the second lap it became more of a game of frogger as I was beginning to lap the slower swimmers and just tried to avoid them as I finished up the final lap. 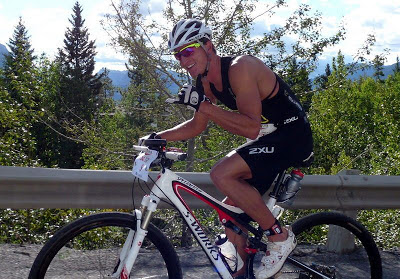 Before the race everyone was discussing how much clothing they might put on in transition to stay warm.  For me I don’t mind the cold as I know that I will warm up.  I made a decision early that I would be fine in just my tri suit as the sun was out and it was beginning to warm up. 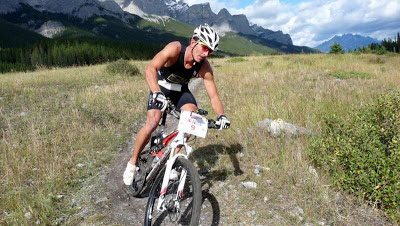 Knowing that Mike Vine would be charging behind and that this was his home course he had a big advantage and with the wet conditions things really fell in his favor.  I tried to power the uphills knowing that on the tight trails he would be quicker.  Through the first lap I made a number of mistakes not hitting the right lines and sliding around on the roots.  One mistake was costly as i slide on a root then caught traction and it send me flying into a tree, after gathering and getting back on the trail I took off again, after the race when I cleaned my bike I learned I cracked my frame when the rear of the bike hit the tree as I sliding around. 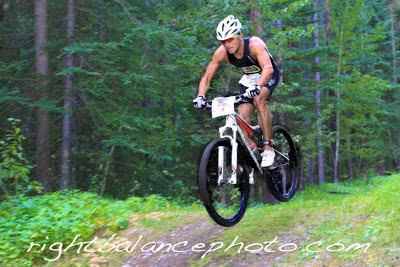 Slowly as the lap progressed I got a bit better riding in the wet but knew I was not as smooth or fast as Mike was going.  I finished the first lap and headed out on the second and Mike was just 20 seconds back after I had a 2+ minute lead out of the water.  I tried to stay with him, knowing that if I could follow his line I could be much faster but he got away on a steeper uphill and my hope was to keep him close enough that I might be able to catch him on the run.  The second lap was vastly different from the first, it was incredible how much the trail had dried out and I was not sliding around nearly as much and felt much better and faster riding and it showed that after loosing over two min to Mike on the first lap I was less than 90 seconds down at the end of the bike. 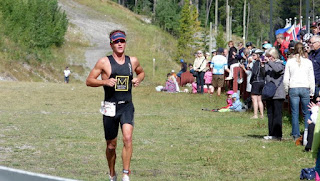 My confidence in my run after Mexico had increased and I headed out fast thinking that Mike was catchable.  The legs were moving and I really felt like I was flying over the twisting terrain.  On a short out and back section I expected to see at least a glimpse of Mike in that area but it was not the case.  No sight or sound of him and it was a bit discouraging.  There was a longer out and back section at the start-finish of the loop but didn’t see him anywhere along there as well.  I had to keep pushing as a guy I formerly raced on the road was a fast runner and could be charging from behind.  The second lap was a bit tougher, I tripped throwing my rhythm off and took me bit to get the legs flowing again.  I held strong through the rest of the run and finished second for the second straight race. 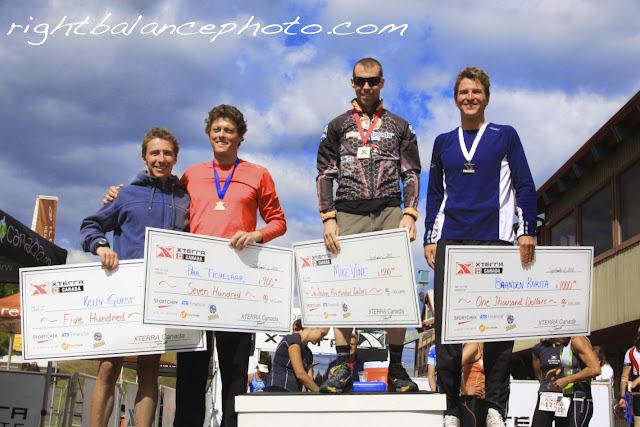