XTERRA Costa Rica
After a few years I returned back for XTERRA Costa Rica, it was a great experience the first time and I was very happy things worked out to make back this year.  Once significant change I made was flying in to Liberia instead of San Jose and when you do this race that is the only way, it saves you a minimum of 6 hours in a car.  I was very happy about that after all of the travel that I had done in the preceding two weeks to Argentina and Chile.  The XTERRA Costa Rica crew had made some great course changes to the bike since the first year as well.  The race is very hard due to the very hot and pretty humid climate and the first year there was a tremendous amount of hike-a-bike and one very steep hill you were crawling up and trying to drag your bike with you.  They changed the course and there is one very steep hill that if things pack down just a bit would be ride-able but it is a very manageable hike-a-bike.  They added some new sections of trail and fun, so if you did the race in 2014 I highly recommend you go back, it is still tough but you will enjoy it a bit more.
The water is beautiful and a perfect temperature for a non-wetsuit swim that is just a touch chilly when you get in but it feels great once you start swimming and with a high of 99 anticipated for the day being a bit cold out of the water feels pretty good.  Because of the high temps we were off running to the water at 6am but it was definitely welcomed with how hot it would get out there.  The plan was the same get on Jean-Philippe’s feet but he started far left and I started far right and I just missed them after clearing the field after the start.  Ian King, Billy Gordon and I swam through the first lap and JP was about 15 sec up so we were staying closer than in Argentina and Chile.  I felt good and lead through the second lap and ever so slightly managed to shorten the gap to JP just a little bit, about half way through the lap I felt a few funny bumps during my stroke and could see some jellyfish floating around.  I was happy that it was only a few of them and not the thousands we were swimming through a few years before.  The current right at the shore was very strong and our timing was off and it was a big struggle trying not to get pulled back in.  Running to the bikes we were only about 10 sec down from JP.

Ian and JP got out quick and were riding to the beach and I laid chase to them, trying to find the hardest packed sand to ride on as we rode along the beach.  I slowly closed the gap down and we started the hike-a-bike together about half way up we heard someone charging from behind and Josiah was motoring us down.  We peaked over the top Josiah took the lead, with me behind, he got a stick stuck in his wheel and had to stop and I pushed on knowing it would not be long till he would be powering back up to us.  JP and I rode together and we jumped back on Josiah’s wheel when he went by and focused on just sticking there.  Josiah slowed on a corner and when he accelerated out of it neither one of us could match it and he slowly powered away.  We continued to work together to try to keep the pressure on and limit the gap he would get, a few kilometers later Kris Coddens rode his way up to us and powered away as well on the next hill.  Through the remainder of the ride JP and I continued to work together, I was more powerful on the flats and led much of it but JP would always be willing to put in as much work as possible.  We had a common goal to limit our losses to the front and to expand our lead on everyone else.  I knew I would like to get away from JP before the run as he has been quicker in the last two races but I was not quite strong enough on the flats to do so.  A big blessing through the race was that it was mostly cloudy and it kept the temperatures much lower and the sun from beating down on us though the bike, which is pretty well exposed for much of the course.
I grabbed my frozen bottle and bag of ice in transition to help stay cool and JP was able to get a gap to start as we headed up the hill on the run out of transition.  My legs were not going very well up the hill and JP easily ran away from me.  I did see Ian King and Ryan Ignatz come riding down the hill and knew that I had to run hard to keep them at bay.  Ryan has run me down a number of times and I didn’t want it to happen again.  Once I was able to get the legs going on the downhill I felt much better and was able to tick things over and just continued to run scared.  On my the second lap of a small loop in the middle of the run that the Olympic distance did twice a sprint racer, Sebastian Alfaro, was just entering the loop.  We ran together and were able to push each other and it helped keep the pace high.  The last 1.5 km’s of the run are tough on a sandy road that is relatively hard packed for most of it but there is a section about ¾ of the way through that is just running through soft sand.  It is brutal at the end of the race but we charged along, after I got through the soft sand I took a look back and saw Ryan coming.  I really pushed that last little bit in and thankfully for the first time really started to feel the heat of the day.  I held strong and finished in 4th and Ryan was not far behind in 5th.

Sorry I don't have any photos her is a link to a few:
https://augustteague.smugmug.com/XTERRA-Costa-Rica
XTERRA Costa Rica
Posted by Unknown at 12:00 No comments:

After a brief time touring Buenos Aires after XTERRA Argentina it was time to head to Chile and get ready for the race there just south of Santiago near the vineyard region of Maipo.  It was a dramatic change from the barrenness of Argentina racing through the vineyards plump with grapes and up and down the surrounding hills through a few farms.  The swim was in a pristine and very new waterskiing lake, though the lake is not very deep, the chilly nights and cool mornings provided a wetsuit swim for everyone.  Everyone who raced in Argentina had come over to Chile and then a number of ITU road guys from Chile were racing as well.  The biggest threat was Felipe Barraza who had proven himself at Pan Am Champs with a top 5 finish there and a good race at worlds as well.  The ITU crew took the swim out much faster than last week the speed was just not there to stay on their feet.  Ian King, Julien Buffe, Gonzalo and I swam close to each other and exited the water a little less than a minute down from the front pack. 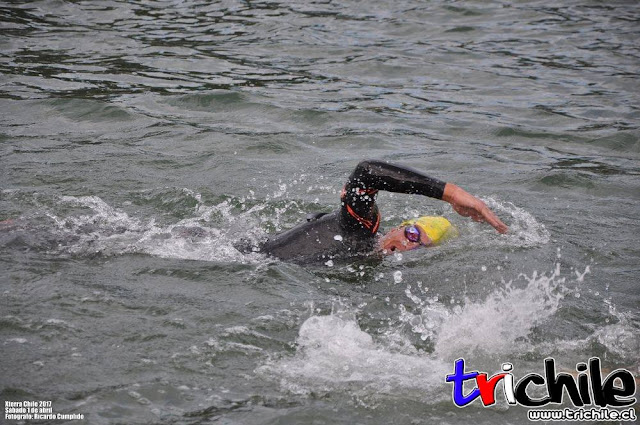 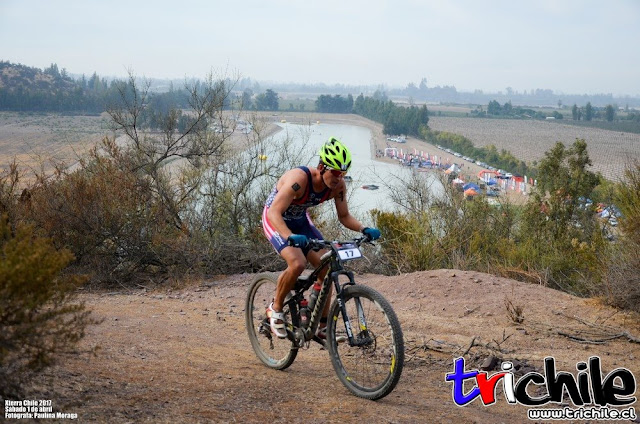 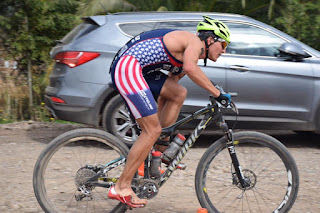 The bike started through a flat stretch and I was able to get a bearing on where everyone was and settled into a strong rhythm and my legs felt better than last week.  After a couple km’s the course gets brutal and head up a 15% climb for a kilometer with a short hike a bike section, Gonzalo and I rode together through the first climb, down a steep descent in a controlled fishtailed slide and then worked together through the next flat section through a vineyard to the next climb.  The climb was not quite as steep as but it was much longer than the first one and Gonzalo was turning the pedals over.  My legs were moving much better than in Argentina and I rode a solid rhythm and climbed my way in to 4th by the top.  There was not much technical but the small short sections certainly caused some of the road guys problems on a rocky and rolling hill section before bombing down the other side of the hill.  A little over half way through there was a second hike a bike section and Felipe Molletta was riding his way to the fastest split and through the field and charged past me.  The last climb was almost as long as the first but a gentler grade but let legs were taking a toll from the steep climbing before and it was a slow suffer up the last climb.  I held strong down the last descent and got the legs to move well riding through the last flat section winding through more sections of vineyards and entered transition in 5th. 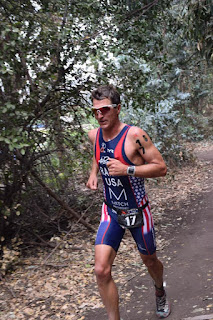 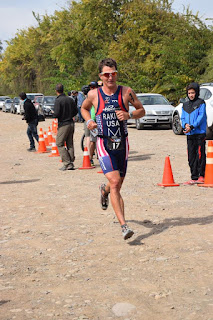 The legs really came around after a miserable run last week and I felt great off the bike and was running well.  The run mimics the bike for a while at the beginning and it is easy to get a good check on your competition as we wound our way through the flats for the first few kilometers.  Maxi Morales was the next guy back and I knew he could run, he was 8 minutes quicker than me in Argentina but I was able to get some splits to him on the flats and we were running the same pace and I got a huge boost in confidence.  Following the bike we went up the very steep climb and I felt good and kept the legs turning over but Maxi was quicker and was closing the gap.  We both descended like rocks down the steep hill, the Inov-8 X-Talon 212 were perfect for grip and I didn’t slip or slide at all going down the 30+% degree slope but Maxi’s small stature helped him maneuver a bit quicker on the corners and he caught me by the bottom.  We were both hurting but he had a little more in the tank and just slowly pulled away from me.  I was hoping that I could reel him back in but the legs were fading, I held on for 6th on the day.  Overall it was a much more positive race than Argentina in how I felt on the bike and run, there were just guys that were stronger on the day.  I have not met the expectations I had set for myself on this trip and I have one more race to do what I had set out to and it is going to be very challenging. 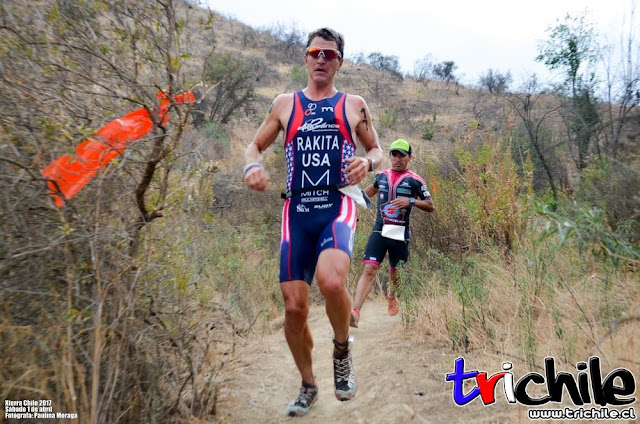