Moving on to Bama

A few short days after Santa Cruz I was off again this time to the pro’s favorite course but least favorable weather for me at least, Xterra Southeast Champs in Pelham, Alabama.  The course is fantastic with some incredible flowing singletrack, a fast road descent into a technical rocky descent to the infamous Blood Rock section then the loose rock decent into more tight singletrack.  The run had a major overhaul from the original thankfully taking out the ‘death hills’ and adding great rolling singletrack.  The only issue I have is always the hot, humid conditions that are ever present when we race in 'bama.
Another reason we love coming back is the southern hospitality we receive from the great athletic community that exists in the area.  Jerry Ryan has hosted as many as 14 of us at once, though I think we all determined that was a few to many.  Jerry is an incredible host, providing a great pre race BBQ, some great stories and what we have coined as Jerryisms.  You really feel like a family going to the race and we love coming back.
The weather was as expected and I tried to adjust as best as I could for the heat and humidity but it really is a process I need to start a month out.  The cooler than normal conditions in Colorado made it hard to get ready for as well.  Before the race on behalf of the pro field I gave Dave “Big Kahuna” Nichols, Xterra World Tour director, a digital thermometer to measure the water temp after the fiasco that was Waco’s wetsuit swim that shouldn’t have been.  Though we knew that it wouldn’t be this is for all the times in the future when the water might be a questionable temp.  The water was warm enough for no wetsuits so I was in my 2XU Super Elite Suit but cool enough so that we wouldn’t over heat.  Craig bolted off the front with the rest of us scrambling to jump on his feet since it was a true swim.  Jumping in for the second lap Craig had about 15sec and Seth was about 5sec in front, through the second lap Chris and I tried to work together a bit but couldn’t close it down much as we headed out on the bike.
Conrad decided to throw some effort at the swim and was out on my feet so I jumped on his wheel as we hit the trails.  I was staying with him but in the process of passing Seth he got away and I was left trying to get by.  After a few miles Dan caught up and then we were finally able to get by Seth.  In the tight twist tree I elected for the Ergon GS1 grips and on the more technical section gapped Seth as we headed out to the main climb.
About 3/4 of the way up Seth caught back up and I stuck to his wheel till we reached the top.  We worked together a little bit and hit the singletrack into Blood Rock I rode it cleanly and hit the next downhill, passed Seth after he had flatted.  I continued trying to stay steady as the temperature climbed and I worked on getting as many fluids in as possible which is hard on this course.  Towards the end Josiah caught up and we headed into transition together.
I made a little mistake as we headed on the run, I had ice in a cooler but forgot to grab it and considered turning around after I had left transition to go back and get it.  Once we were out on the road I knew I should have grabbed it, I wasn’t going to run with Josiah and should have spend the time to get the ice to help keep me cool.  It was a sufferfest through the run and I just tried to get in as many fluids as possible to prevent further dehydration but it was too late.  I managed to just keep moving but it was not pretty, Nico passed me about 3 miles in and Cody went by at about 4 miles and I was just trying to hang on to the last money spot and managed to limp home in 7th.  Overall I did swim well and rode the best I ever had on the course but I need to prep for the heat better.  You can’t race your best every week so it was just one to learn more lessons from.
Posted by Unknown at 12:38 No comments:

Lets get caught up shall we

Its been a busy month since ITU Cross World Champs in Spain, after a weekend at home it was back to the road for the next Xterra.  It was a return to northern California for Pacific Champs in Santa Cruz.  Leading into the race the weather was great, warm temps the course was dry and a bit loose, however a strong rain storm overnight change the course so it was a bit wet and slippery and chilled things down greatly.  It was a split transition so after setting up T2, we jumped on the bikes and rode over to T1 for a brisk warm up along the coastline.  Thankfully I brought my 2XU Cycle jacket to keep me toasty on the way over.
The swim was as to be expected a chilly mid 50’s two lap affair through some decent chop to help break things up.  The chop made it hard to stay on the feet in front of you but I managed to find my usual spot behind Seth and Chris through the first lap.  During the run between laps I jumped to the front and pushed hard to see if I could gap things out a bit more and held strong till we rounded the final turn buoy and Seth jumped back in front.
Seth and I headed out on the bike and charged along the first 5 mile section all along the road working together to try to keep the gap we had built out of the swim unaware of how close anyone was behind.

Dan Hugo caught us just before hitting the dirt and that is when I felt my legs go.  I felt like I was riding a flat tire but it was not being able to put together great training for the last month with all the racing and traveling.  I tired to ride solid and consistent, after a few more miles Conrad powered up to me and I rode hard till we reached a point where he could pass.
After finally peaking out over the top we reached one of two good sections of fun singletrack through the redwoods.  The dirt section consisted of three sections, sunny long bumpy, rocky undefined singletrack and road climbs to soft tacky sweet singletrack where it was almost dark from the redwoods over head to a slick, wet dirt road descent where there was no traction and you were just sliding though the corners.
I lost one more place to Josiah along the second stepped road climb and lost a bit more time on the descent after sliding out and hitting the deck on the road back down to T2.
I started the run and immediately saw Craig and Trevor Glavin coming up the hill in to T2.  It gave me a bit of worry since Trevor had just rocked Ironman St. George the weekend before and was crushing it here.  Thankfully the legs responded and I was able to stay steady through the run.  Along the way is was inspiring to see Jamie Whitmore out racing again after her battle with cancer and then having twins.  Having her out helped boost me knowing that this is nothing compared to what she went through with cancer. 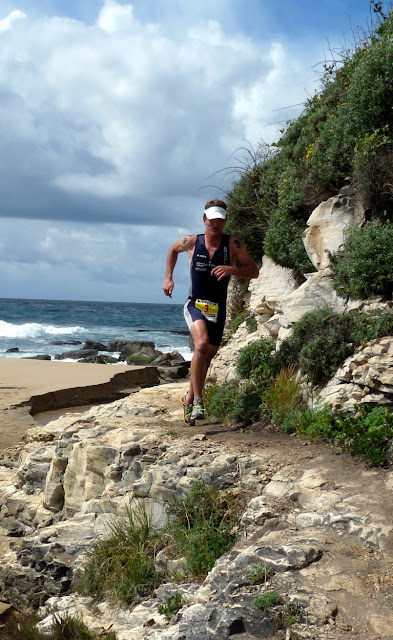 There was a bit of fun on the few quick sections of trail, dropping down to a small beach section then along the cliff edge trail back up.  It was then a long flat run through farm fields back toward the finish.  I held Craig and Trevor off and finished with another solid 5th place.
Posted by Unknown at 08:19 No comments: