XTERRA Beaver Creek
A couple weeks later I was on to the closest thing I can call a hometown race being in Colorado.  It also starts the beginning of the mountain courses with all the remaining courses on the Pan-American series all have a lot of climbing involved.  Being that Colorado is a training hotbed for triathlon in general, racers come out of the woodwork and race Beaver Creek since it is an easy drive.  This year was no exception with some very top name road guys racing their first XTERRA and a few guys that do 1-2 XTERRA’s a year that are very talented.   This also changed the dynamic of the race a bit over the XTERRA in Alabama and Milton where there was a group of 2-3 of us in the swim to now a very solid group of 7-8 guys to push the pace from the gun.

Leave it to the roadies showing up to do a gradual forward drift of the start line during the countdown to the gun, I took my normal position and got away clean on the side with Brad Zoller and happily slid back to draft him after clearing the dock.  Normally I take 10-20 hard strokes then settle in but I couldn’t get comfortable and find my stroke and breathing was difficult.  Brad built a small gap and it stayed steady through the swim.  I knew I wasn’t swimming fast but no one behind me wanted to take the lead and catch Brad so I just cruised at what was comfortable.

I headed out on the bike in second and passed Brad shortly there after and was joined by Ben Hoffman, Rom Akerson and Leon Griffin.  I think all of us were feeling a bit off as I knew I was not 100% on my game but they were not accelerating away from me at all and it was a very slow gap to open.  Just before the cross over point of the bike Josiah rolled up to me with someone else in tow and continued to roll away.  Once on the short road section I got a gauge on Ben, Rom and Leon and knew I needed to overtake Leon before we started the downhill to start gaining time on him and by the top of the climb I managed to catch him and took off downhill.  It is not very technical but you can still open up some time on the switchbacks down Arrowhead.  I pressed on hoping to keep close to the 4 guys up the trail on the traverse on Village to Village trail trying to not let Leon catch back up.  Everything remained the same through the end of the bike and I headed off in fifth knowing it would be a tough task to catch anyone ahead but also wanting to preserve a top 5.


I managed to preserve things for about a mile before Leon rolled by, I kept things in check for the first 5k and the legs were feeling good on the downhill and was hoping for a stronger 2nd half of the run.   The legs would not respond as well as hoped on the second climb and he opened up the gap more.  I was glad to have gapped the other guys behind on the bike as I needed the time over guys like Greg Bennett and was able keep things rolling and finished 6th

XTERRA Mine over Matter

Need to get a little caught up, so a few race reports will be coming over the next couple days, first up XTERRA Mine Over Matter in Milton, Ontario (that is Canada for those geographically challenged)

XTERRA Mine over Matter
This is very late but want to still get the word out about XTERRA Mine over Matter. It is a bit different as it is a very fast race with a slightly shorter swim like Richmond as well, but the bike is shorter as well the roots and rocks and powdery dirt in dry conditions were very much like Richmond.  Then you have the full length run to top things off.  Keep in mind for anyone who should venture up there in the future they do not follow the XTERRA rules that the US series races are run under.  In Canada they more closely follow the ITU rulebook.  Keep this in mind in the event of a non-wetsuit swim as swimskin/speedsuits are not allowed unless you are willing to wear it for the entirety of the race, this may affect your choice of race kit!  I was wishing that this was more public announced and decided upon well in advance of the race instead of the Wednesday before when many of us had travelled to Milton.  I mention this because it did affect me, but thanks to Karsten Madsen and it being his hometown race he was gracious enough to loan me an old one piece suit that is quicker in the swim than my two-piece kit. 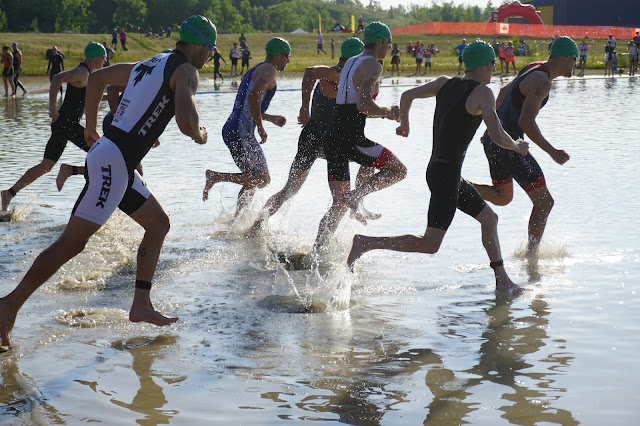 The swim is in a quarry pond and was a 1 loop, 1000m affair and it was fast and furious, I knew Karsten was going to be gunning to take the win as there was some added pressure being his home course and his family and friends were out in force supporting him.  He took it out fast and an old racing buddy Sean Bechtel and followed on his feet.   Sean let a gap open up and I never had a chance to close it down and just tried to keep the damage to a minimum.  I did until it seemed like the last stretch when all of a sudden the gap went from what I was holding to 10 sec jumped to over 20 when I got on the bike.

Karsten knows these trails better than anyone and so I knew going in that I needed to do 1 of two things, either get on the trails ahead of Karsten and hold him off as long as possible or be right with him and try to hold on as long as possible.  The gap he created in the swim didn’t let either of these things happen and I was left to do my best to not loose to much time and try to maintain second.  I felt like I was riding pretty well but about ¾ of the way through Sean who is a local boy as well caught me and I used him to help guide me through the rest of the bike.
We came off together and headed out on the run.  I was happy to quickly assume 2nd and felt good running but knew that I had to keep the pressure on; not to catch Karsten as he had built a lead that would only be lost with an epic meltdown, but to hold off Chris Ganter.  I felt good and was steadily rolling through the run but he ran me down at about 7k.  I pushed to stay with him as best as I could and was holding strong only just a bit back from him, until things flattened out a bit more on a lap around the lake and he opened things up a bit and I finished off the day in 3rd Not to bad of a day, some small mistake were made but overall it was another solid race.
Posted by Unknown at 09:48 No comments: