This is one of the must do races in off-road triathlon, now XTERRA Oak Mountain with the new XTERRA Pan-American Series.  It is an honest course and a lot of fun and there are 3 different distance races to allow you sample what off road triathlon is all about.  I promise it will put a smile on your face during and after the race.

Some of the joys of off road racing the weather and trail conditions can drastically affect the race, on an pre-ride on Wednesday we started in dry conditions and ended up in a rainstorm.  This took the trails from dry and a bit loose to tacky dirt with slick roots, rocks and bridges, and the way you ride loose dirt compared to slick roots is entirely different.  It was a wait an see game to see if more rain would come and keep things slick or if it would stay dry.  We have raced in the rain here a few times and I knew that I would have a bit of an advantage over some other guys as I had gained confidence riding the Oak Mountain trails in wet conditions.  Over the next couple days the weather evened out and the trails turned to hero dirt, where the dirt is perfectly tacky, not to dry but not to wet, it’s just right. 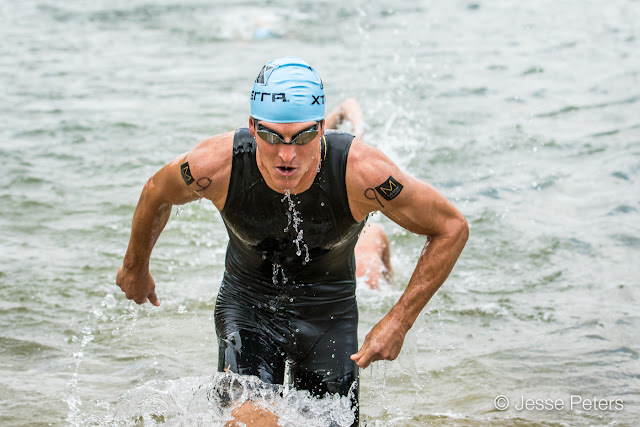 Exiting the water between laps on the swim. PC: Jesse Peters/Backlight
The swim was ideal, calm flat lake with no wetsuits; my plan was to get out fast with Mauricio Mendez and Karsten Madsen and then settled into a good hard pace.  Things started well but Mauricio never settle he just held the same pace from start to finish and with Karsten and I trying to work in to his draft he got a gap and slowly opened things up.  I pushed the chase but Mau was to strong and kept edging away. 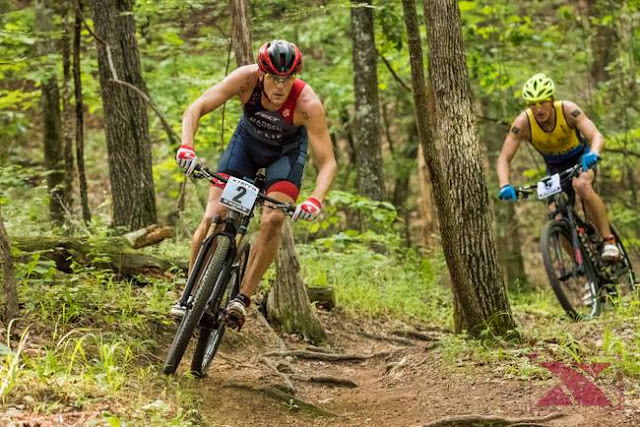 Karsten and I hitting the trails in chase of Mauricio, basically the way the bike looked through the entire leg. 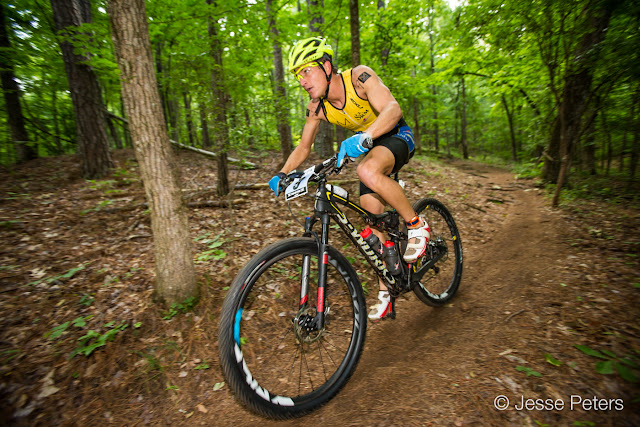 Exiting the water about 40 seconds down, my thoughts were to just chip away at his lead due to the technical nature of the course.  Karsten and I hit the trails and were riding well until I bumbled up things on a rooty corner and a gap opened between us. Being just that bit separating us help both of us keep pushing on the bike but as we kept getting further along with no sight of Mau, I was apparent he upped his technical skills an it would be that much harder and less likely we would catch him.    On the main climb Josiah caught us and cruised through in the hunt for Mau but there was little I could do to try to keep pace with him.  Through the rest of the bike Karsten and I continued to push still with a 10-20 second yo-yoing gap between us through the rest of the bike and entered transition a little less than 3min down from the leading duo. 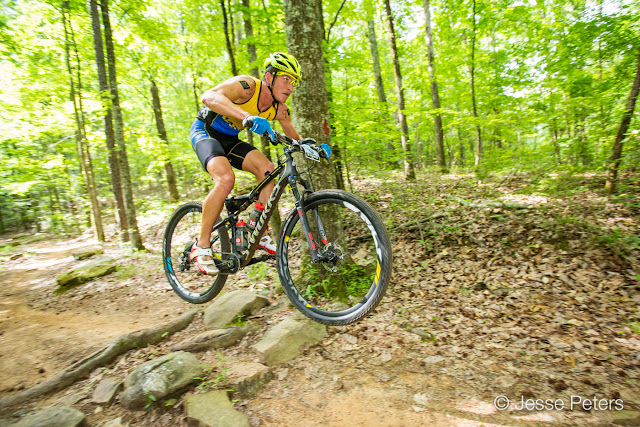 You do not get to have this much fun in any road triathlon.  PC: Jesse Peters 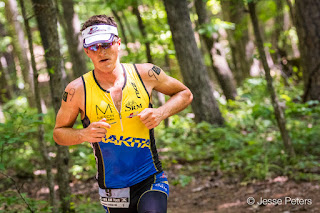 On the run I worked to try to keep an even gap behind Karsten but he gradually edged away and I was running scared.  I was very happy to have kept a good gap on Chris Ganter and Cody Waite through the bike but had to hold through the run, this is where the mental part of racing comes.  I had to keep focus forward and not worry about what was going on behind me, as I started the 2nd lap of the run a fast amateur started his run with me and I was able to use him as  a carrot to help push me through the second lap.  With about ¼ mile to go I managed to sneak a look back and see that Kieran McPherson was flying and I really had to push the last bit in. 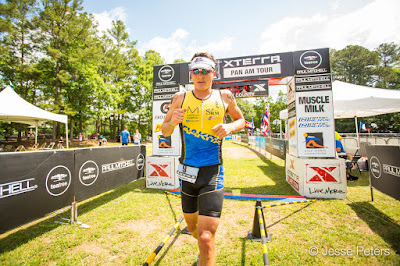 Happy to put a solid race behind me after a couple tough ones on the road.
I managed to find that little extra gear and hold my 4th position through the finish.  Though I wanted a little higher finish it, I really could hold my head high walking away from the race as it is the most complete race I had put together in Alabama and overall and will help in building into the next few races. 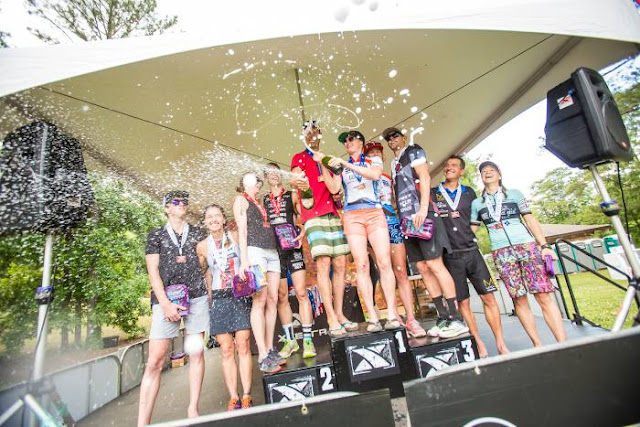 The biggest change due to the drought the last few years is the necessary change to a swim, run, bike, run format due to having to move the swim from the Lynch camp area to Harris Creek where there is actually water.  It was a bit of a shock driving down Lynch Hill when I arrived at the venue and seeing what looked more like a pasture than a lake bed.  All I can say is that Tri-California, the event organizers, have done a fantastic job in working with the conditions they are presented with and still put on the best half distance triathlon out there.  I was a very unsure how I would react to the swim, run, bike, run style of the race but in the end I very much enjoyed it.  It is nice to have things changed up now and again and racing this format certainly provided that.

One thing that has not changed is the tight swim start between the boat docks, it causes a bit of a melee at the beginning but once past the end of the docks it opens up and you are able to get in to a rhythm and that is what I was able to do.  I found a comfortable position in the pack and was able to cruise along and found myself feeling stronger and stronger and slowly moved up the pack.  About halfway on the way back in I found myself leading the main pack, not far from two guys that had gotten off the front.

Once out of the water I had a great quick transition and lead the charge up the boat ramp but I had company quickly with the likes of Jesse Thomas, Matty Reed, Terenzo Bozzone, and Ben Collins coming up quickly behind me.  I felt great running and maintained a good position in the pack and felt like I was set up well headed on to the bike.

Though I felt like I was moving well, it was never good enough and one after another guys passed me.   I kept asking for more power from my legs but it never happened.  The course is an honest one which is something I really enjoy about it, there is no place to really hide or just sit in the pack and cruise along, unfortunately it was showing that I did not have what it took that day.

Once on to the run I was hoping the legs would respond well and I would feel as good as I had during the 2-mile run from the swim to the bike transition.  I certainly had glimpses of that but overall things felt a bit flat.  I was definitely happy that the run was only 11miles at the end instead of the normal 13.1 as the last couple miles the legs started to tighten and I started to slow.   The last mile running down Lynch Hill is painful when you can’t run as fast as you would really like but I made it down and crossed the line in 17th.  Not the result I was planning on and I definitely have some unfinished business at Wildflower and look forward to heading back and racing again.