After the awesome experience last year of heading south of the border to Tapalpa I knew I wanted to come back.  A small mountain town about one and a half hours outside of Guadalajara you escape the tourist trap cities of Cancun, Cabo, etc.  The cobbled streets and town square are a serene setting for the race and being a point to point it might be the only net downhill bike course on the XTERRA calendar.  The swim at Valle de Lago about 5k from Tapalpa is a private lake that hovers around the wetsuit legal limit.  Doing a bit of research going in learned that it had been a wet year and that the bike course was going to be muddier than last year and leading up to the race there were a couple storms on Thursday leading into the Saturday race.  A good portion of the  professional field all headed out for a group pre-ride of the course and we all got amply muddy by then end of it.
Ending in town we did get to enjoy some spoils of some homemade ice cream for those that wanted to partake before riding home.  I treated 5 of us for $35 pesos, about $3 US and the size was about the same as a single scoop at a normal creamery in a waffle cone. 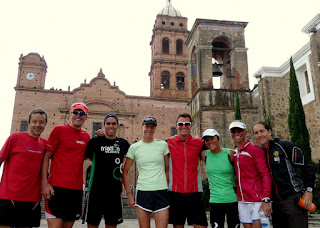 The next day we traveled back in to town and after cruising a loop of the run course ate at Paulino’s and indulged in a couple of chard tamales.  Thankfully the rain stayed away though the skies threatened for most of it to deepen the puddles more. 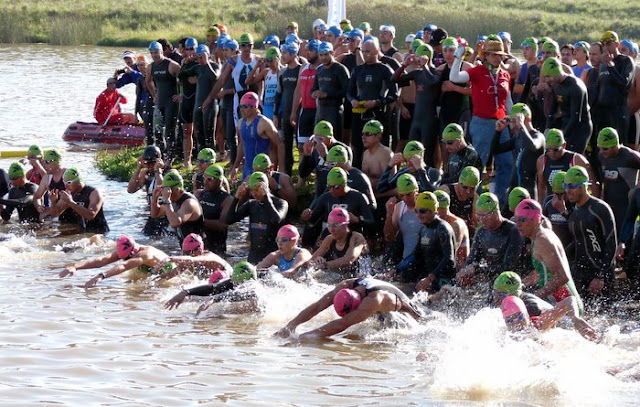 Even with all the rain the water temperature stayed at 21 C and was a non-wetsuit swim for the pro field but wetsuit for the amateur field, welcome news to some and not so accommodating to other pros.  Due to a delay from the kids race that morning the elite wave and the 2nd wave were grouped together thus making for a bumpy beginning to the swim.  The buoyed age groupers in their wetsuits were able to swim a bit faster than  normal and with their spirited sprint off the line I had to push the beginning of the swim for a bit longer than I really wanted to get to clean water but after the age groupers died off a group of four of us were left chasing Irving Perez for the two loop swim.  Unlike Mountain champs a few weeks ago the body felt good, smooth fast stroke and was cutting through the water.  I set the pace for the group and lead through the two lap swim exiting about a minute fifteen down from Perez. 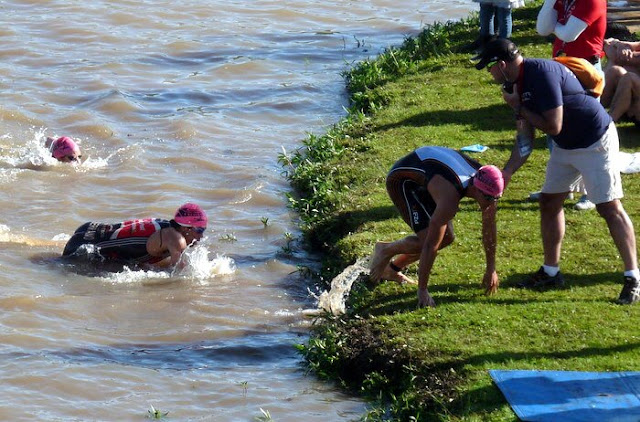 I hauled into transition and took off with Francisco “Paco” Serrano.  We had raced against each other when I was doing the ITU Olympic road triathlons but after switching to XTERRA it had been a number of years since I we had squared off.  Out of transition he jumped on the bike and his rear tire had leaked down and had to fill it with air.  There were two thoughts in my mind, this is a chance to get a lead and take advantage of it, the second was crap, having a partner out there on the course especially the second half of the course to work with would be great and we could push each other.  I certainly wasn’t going to wait around and pushed off to get as big a lead as I could.  I powered through the first couple miles of the course and caught Perez at the top of the first downhill and left him behind.  Once on the long climb I settle into a hard but comfortable rhythm and progressed along.  About half way up at the top of an extended steep section Paco caught back up and we traded leads back and forth on the way up pushing the pace.  Just before the last kick to the top my chain dropped on the front and he took off as I had to stop and replace it on the ring, when that happened he had the same thought I had when he had to air up his tire I learned later.  I charged back up to him at the peak of the climb and we started the decent together.  With all the rain it was a very tricky descent with all the mud, ruts and puddles that you couldn’t tell how deep they were.  Paco hit a very slick section and got thrown off balance and I took over the lead as he regained control of his bike and clipped back in.  I led for a while sliding through the corners 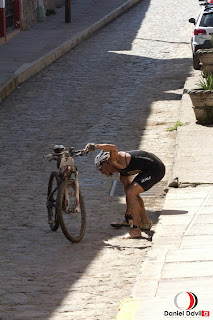 and trying to control the bike on an uncontrollable surface.  I made a mistake going through a puddle and slowed down, Paco took advantage and seized the lead.  I made a couple more mistakes not taking the right line through a few puddles but slowly caught back up to him by the base of the downhill.  We weaved through a few of the race crew that were on ATV and took off on the dirt road down to the town trading leads back and forth avoiding cattle, horses  and large muddy puddles but were inevitable covered in mud.  The last stream crossing a bit more than a mile from the end of the bike that was much deeper than when we pre-rode and I had to dismount but it helped get a little cleaner.  Once in town we had to deal with a stream of cars heading the opposite direction on narrow streets.  I was taking my feet from my shoes on the cobbled road and the shoe unclipped and fell to the ground as I tried to put my foot on top, a quick stop to grab the shoe allowed Paco to take the lead and I ran into transition seconds behind. (Check back for race video of the bike) 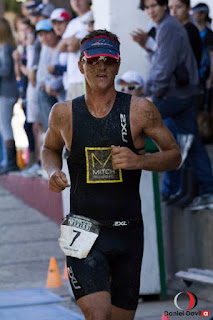 We were off in a flash on the run charging though the entire population of the town that was there watching the race.  As we flew along trying to pick the fastest line, ending up on opposite sidewalks till a left hand turn took us uphill for the next 1.5km.  Paco slowly opened up a gap of about 30 seconds by the peak of the climb, but as we hit the downhill my legs started to really turn over and I slowly stated to decrease his lead.  Once the descent got more technical and steeper I used it to my advantage and really started to close down on him.  At 4k he went straight instead of left, with a quick breath  yelled at him, alerting him to his mistake and bombed down the steepest sidewalk you could run down regaining the lead.  This was an opportunity I couldn’t squabble and pushed as hard as I could back into the town square.  I knew the basics of going through the square from racing the year before but there are always small changes and there was a big one as I bounded down the steps as the run course went straight through the race expo, weaving around transition, jumping a rock inches from the crowd taking off for the second lap.  I knew I had opened up a decent gap as I started the hill but knew I had to at least crest the top with him to have a chance.  I had one change on a tight switch back section to see that he had closed the gap down but still held a ten-second advantage 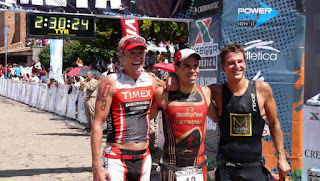 over the top.  One the gradual down at the top of the climb the legs were not quite as open as the first lap but I continued to push.  At 8k I could hear footsteps behind and in a breath he was by me and I had nothing to respond, only hope was to keep it manageable enough to catch him on the steep section of the downhill.  At the top of the steep technical section my heal hit a sharp stone and that was it, I could not run normally and finished 23 seconds behind Paco. 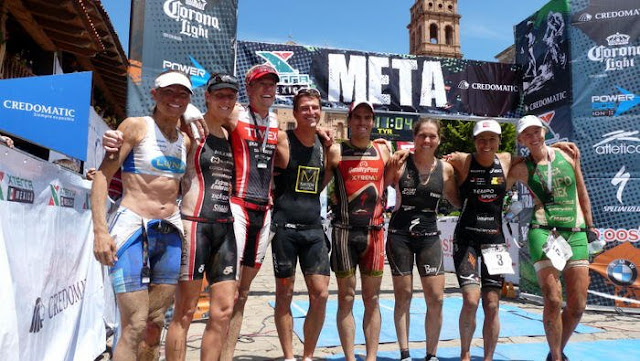 I had not been in a back and forth race in a long time and we both fought extremely hard overcoming little issues throughout the race.  After spinning home and getting to put our feet up it was all about getting the bikes cleaned and packed before we headed back into town for the awards celebration.
This is definitely a race to put on the calendar to attend, the entire town is out watching you, it gets a bit crazy and less controlled than at the races in the US but it is all part of the fun.  Did I mention it is probably the only net downhill XTERRA on the whole circuit? 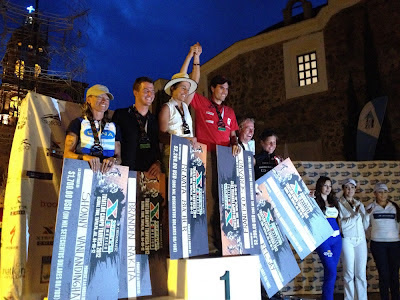 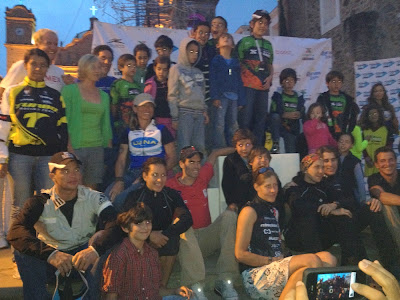