It had been a month since Vegas but the days flew by and before I knew it I was on my way back to Alabama for what is more commonly know as the XTERRA Southeast Championship but this year had and extra designation as the ITU Cross Triathlon World Championship.  Instead of just racing for XTERRA points in the US Tour we would be racing as part of our country team.  I earned an automatic spot being the third US finisher at XTERRA USA Champs last year.  The majority of the normal XTERRA cast was there as well but there were extra additions from other countries.  The ITU designation also changes the way the race is organized and the course for the professionals.  Normally pro’s and age groupers all start in a big bunch and we all race the same course, but we were racing ITU style so the amateur men and women had separate start times in the morning and finished racing then the pro women would start and the pro men would follow their finish.  The course was also designed to be a spectator friendly affair with multiple loops over all three disciplines and Oak Mountain State Park is a near perfect venue for this race.

I started off on somewhat of a wrong foot by forgetting to pack my pedals in with my stuff.  After a few texts and calls I located a pair I could borrow for the first couple days pre-riding from Conrad since we use the same one, the Look Quartz.  A fellow US Elite team member Kim Baugh went and picked my pedals up at my house and brought them with her since she was traveling down a day later.  This is really what sets XTERRA apart from any other triathlon, we are a family and every athlete is always ready to help each other.

It took a bit of convincing but my mom and dad came down to the race as well, dad was racing of course and mom was the ever present support and spectator.  My dad had a fantastic race won in a sprint finish by two-seconds and now has an ITU Cross Triathlon World Championship to accompany the XTERRA World Championship he won in 2010.  It was then on me to represent the family that afternoon in my race.

All I knew going in was that it would be very warm and everything I did took that into account in trying to stay cool before the start of the race.  I used an ice vest to help keep the core temperature down before we lined up and dove in to Double Oak Lake for the two lap swim.  I started strong knowing that there were some very fast swimmers in the field and it would really help if I could latch on to their feet and get pulled through the swim.  They were a bit to quick and I was just off the back of them and exited the water in 7th, about a minute down from the leader and 20 seconds off of the main lead pack.

After a frantic transition I was off on the bike with Conrad on my heels and he jumped ahead just before the dirt, perfect position to follow him and hopefully get pulled along.  I got into a groove which is critical on the tight and windy course through the trees, which also make it a course where you don't want bar ends and so the Ergon GS1 grips were on the bike in place of the GS2.  I managed to stay with Conrad for a bit but his power was too much to try to hold on to and I fell back a bit and settled into my pace.  With the tight course the main concern was passing since there were very few spots where it was available and safe to do.  I got through three people on the wider sections of the course and was unscathed so far.  I came up on a Mexican athlete that was having mechanical problems but he would not move from the trail, and I had to go off the trail to pass him.  Note to other racers if you are having an issue don’t impede or interfere with the others in the race.  Once I was clear I was able to set my own rhythm and tempo focused on catching the last guy I knew I could, Richard Stannard as I would need an unfortunate incident to happen to Craig or Conrad if I were to see them again in the race.
I picked up a new bottle of First Endurance EFS at the end of the lap and charged off and by the end of the second lap caught Stannard and charged head grabbing a last bottle of EFS as we hit the last lap.  We traded pulls on the road but I knew I would want to be head going on the single track and lead through the first section.  Stannard pulled a cheeky little move jumping ahead going across the dam and I was forced to follow as passing was very difficult, but thankful that it helped by pulling me through a slightly more aerobic section of the course.  When we hit the “peak” of the course and bike handling became more important than aerobic ability I attempted a couple passes then finally called out a spot and got by.  The fatigue was starting to set in from the twists and turn and having to stay focused and I made a bobble or two but started to gap Stannard.  Nearing the end of the course I really pushed on a section where you could choose to stay high on a bridge or go low.  I had chosen low each time and did so again but ended up further left on the trail than normal and a sapling appeared out of no where and I was tossed to the ground.  No time to lose jumped back up and on the bike only to have to get back off, put the chain on, while Stannard re-passed me and then hauled off after him.  We entered transition together, and in a mad rush collided with Chris Legh, who appeared out of no where behind us and headed off on the run.


Immediately I felt the crash as my hip was a bit sore and tried to sort things out.  Legh and Stannard easily cruised away as I struggled to get the legs going.  Through the first lap of the run the legs struggled as it seemed the field was slowly catching up and I couldn’t do much to stay with anyone that went by.  I slipped back to eighth by the end of the first lap and it was hard to mentally to keep progressing at that point.  I played mental games through the second lap to move quicker but the legs just would not turnover going up hill, but I was able to open things up a bit on the downhills.  I soldiered across the line in 9th, immediately wanting more.

I took a moment to get out of my funk of not performing how I am capable and found the guy that I knew would put a smile on my face because of his performance.  Craig Evans had an inspirational race taking 2nd to Conrad (taking his 6th off-road World Title).  He did what very few could do staying with Conrad for the majority of the bike turning himself inside out to stick on his wheel.  Then having an amazing run closing the gap down on the first lap of the run.  His celebration across the line I could hear from the other side of the lake and that is something that put a bit of a spring in my step for the rest of the race.  His performance here and Dan Hugo’s performance at the XTERRA World Champs last year are races I wish I could have watched more than been in for the gutsy performances for laying it all down and making the races that they were.  It is back to work for me to try to get it all sorted and work on having a performance I might be proud of like their performances. 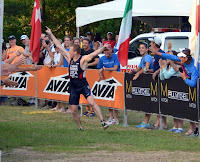 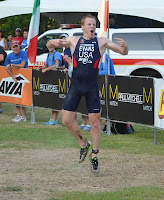 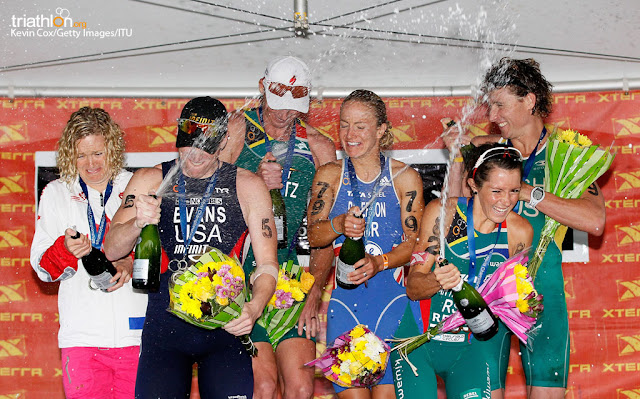 Preview of the ITU Cross Triathlon World Championships Course on a pre-ride with Patrick Valentine.
Posted by Unknown at 11:25 No comments: