Though I am way behind on may race reports I will start with the most recent and work my way back, and in essence I am going from a great race where I overcame a few metal hurdles to the races where I was not mentally strong enough to do so.
XTERRA Mountain Champs has always been an important race for me being essentially a home race and one to gain confidence from before going back in to a heavy training load leading in to USA and World Champs.  Last year I had a very off day and I was determined to not relive that experience.  A number of the other guys were not expecting much from me since I had only returned from a couple of races in Europe on Monday preceding the race and they had seen me low in the results in the previous races.  The only though for the race was that I had nothing to prove to anyone else, I needed to prove everything to myself.
I positioned myself high on the shore for the start and was able to run a few steps and dove in and got body length on the field at the start.  Normally a roadie but venturing into the off road scene Kyle Leto caught up and we swam together through the first lap.  Kyle slowly began to gap me on the second lap but I decided to play it a bit safer and maintain my pace rather than push it to stay on his feet since we were at 7500 feet.  I was also banking a bit on the coming ride that even though it isn't technical it is much different than the road and I would put time into him even though he is a strong rider.
Once on the bike I was just 10 seconds down and quickly caught up and made sure that I was setting the pace when we hit the dirt.  This was where I had to mentally stay focused through the ride and continually push, it is racing and it always hurts, it doesn't matter how fast or slow you go it will hurt.  I needed to make sure that I kept the pressure on, if I let off then it hurt a lot more.  I gapped Kyle, however Ben Hoffman was inching his way up to me and Josiah was rocketing up the climb and erased a near 2 minute deficit from the swim by 4 miles into the bike.  I couldn't quite hold Josiah's wheel as we hit Strawberry Fields Road and when we peaked out over the top of the climb he had a minute on me.  I burned the decent hoping to open up some room to Ben and then really laid the power on once on Village to Village trail.  The gap grew to 1:45 to Josiah and I knew if he didn't have any mechanical issues we wouldn't see him again till the finish.  I knew Ben was behind and might be closing and there was a strong field behind trying to chase us down.  At the start of Ally's Way, the gap was down to maybe 10 seconds to Ben, I took as many chances as I could on the decent, over cooking one corner and going down.  I was surprised that Ben didn't roll up on me when I was getting going but took off again and headed into transition.

After pushing the pace on the bike my legs were heavy as I hit the run and with two long climbs with some steep sections it was not a place where you wanted your legs to be moving slow.  I managed to keep things moving well through the first 5k and was hoping the downhill would help my legs turnover but the second climb really sapped my legs and they really started to burn.  I did not see or hear Ben coming up on me until a few long switch backs as the trail wound back to the finish.  It was a huge mental breakthrough as I crossed the finish in 2nd, one of my proudest races of the effort and staying strong throughout the race which is something that I had not been doing the last few races.  It was a nice confidence boost as well that I was able to race up to the ability that I had been showing in training. 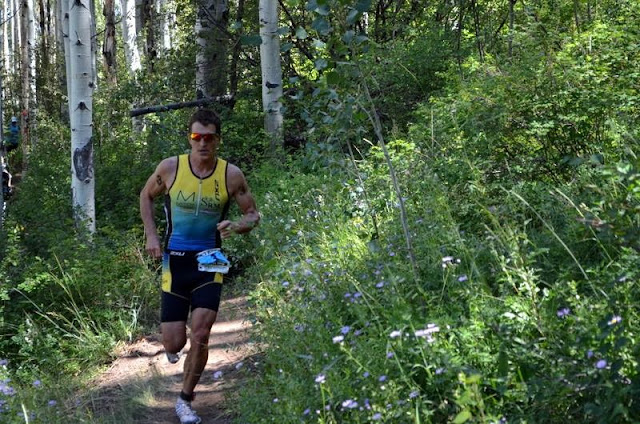