Great Opportunity and Starting on the Wrong Foot.

As I entered the 2011 season I had a lot of great hope that it would be a great year.  I was the healthiest I had been in the off season and as I started my early season training.  Although the few road triathlons I did were not as successful as I hoped my XTERRA campaign was great.  Top 5 in 5 of the 6 regional championships, 6th at USA Champs, 4th overall in the US Series.  Internationally 8th at the ITU Cross Tri World Championships, 2nd at XTERRA Mexico, 4th XTERRA Canada, unfortunately XTERRA Worlds did not go as well as hoped placing wise but I was closer to champ Michael Weiss than I had been any other year.
I wanted to build on that success and progress in 2011 by focusing on my training and ramping things up going into the 2012 racing season.  In order to do this I decided to head to a location with great weather, a large group of training partners and most importantly an area that has a good mix of good roads and trails to ride and run.  I considered the Scottsdale/Mesa area but didn't know that many people in the area or how the training was and housing was not something that I had set.  San Diego was another option, I was familiar with training, I had a number of friends but Southern Cal is expensive.  My decision was to head to Tucson, a number of athletes call it home through the winter, there are great trails and roads to train on, it is a bit cheaper and fellow triathlete Christine Jeffery has a place that I am very grateful to get to stay at.
My plan was to find a part time job at a local bike shop and come down in early December that way I could learn the roads and trails for a while before getting into the serious training at the beginning of the year.  After a bit of searching and a few things falling through, the trip south was more and more delayed and I made the decision to come down sans work.  The idea for the trip was to get in some great training and that is exactly how I am treating the trip and if I was able to find a bit of work to fill in some gaps.
On the 17th I started my trip down, heading first to Durango to get to spend a couple days with my family.  It was great to spend sometime near the holidays, get some great home cooked meals and we did Christmas a few days early since they were headed to see my Grandma over Christmas.  This trip is entirely possible because of my parents, I couldn't do this without their love and support and I owe them everything.
I continued down to the Phoenix area and stayed with and old college buddy Eric and his family for a night and got in some great training in McDowell Mountain Park.  A close friend was in Mesa for the holidays and she invited me to spend Christmas with her family.  It was great to be around such a loving family since I was not around my own.  Had a lot of fun going to a hockey game, and a few great hikes as well.  I learned some great training areas in the Scottsdale/Mesa area and would definitely keep in in my mind as a place to go.  I was torn on leaving but I needed to get to Tucson since that is where I had things set up and planned on being and headed down a couple days after Christmas. 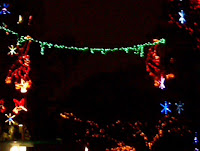 On Wednesday the 28th I planned on meeting a fellow XTERRA racer for a mountain bike ride to learn some close trails.  As I was driving over to the trail head, I stupidly looked down at my phone for the directions and wasn't paying attention to the road and traffic and rear ended the car in front of me when the line of cars slowed up quickly for the stoplight ahead.  Both airbags deployed, passengers side destroyed the windshield, the hood is dented up and the right side panel is damaged along with the frame on that side as well.  Needless to say that there is a lot of damage to the car and it will take more to fix it than the car is worth, not to mention the oil leaks that needed to be fixed before the accident.  So it will certainly make things interesting as I learn to navigate a new city without my own transportation.

Thankfully I have some incredible friends, Chris is providing so much already but at least I can get rides from her and be able to get to the store when she goes.  Ben Hoffman, former Durangoan, new Tucson training partner and an incredible athlete, it loaning me his scooter so that I can get places as well.  I am forever grateful for their help while I get my own wheels back under me.

I may not be ending 2011 on the best events right now but the opportunities and possibilities of what lie ahead are very exciting and I can't wait for 2012.  A happy and safe New Years to all.